Gamepedia
Help
Sign In
Register
Dear readers and editors!
Gamepedia has joined forces with Fandom and we are considering merging Slither.io Wiki on Gamepedia into its Fandom equivalent on 25 March, 2020,
unless there are valid objections against that process.
Please use the discussion page on the Community Portal to bring up any concerns.

Join the Slither.io Wiki on Fandom!

Slither.io is a massively multiplayer browser game developed by Steve Howse.[1] Players control a snake-like avatar, which consumes multicoloured pellets from other players, and ones that naturally spawn on the map in the game to grow in size. The objective of the game is to grow the longest snake in the server. Slither.io is similar in concept to the popular 2015 web game Agar.io and is reminiscent of the classic arcade game Snake.[2] The game grew in popularity following its promotion among several prominent YouTube users such as PewDiePie.[3] A mobile version of the game for Android was released on March 27, 2016,[4] and topped the Google Play Store shortly after its release.[5] 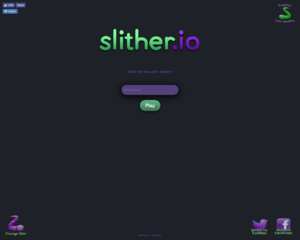 The objective of the game is to control and move a snake (or a worm to most players) around a coloured area, eat pellets to gain mass, defeat and consume other players to grow the biggest and longest in the game. If the player's snake's head collides into a part of another snake, the player loses the game and must start over. The defeated avatar's body turns into bright, shining pellets for other players to consume.[3] These pellets that remain from "death" of an avatar will correspond the color of the avatar itself. Pellets also spawn from other snake avatars. By pressing the space bar or clicking the mouse, the player can activate "boost mode", which causes the avatar to speed up. When a player does use "boost mode", the snake loses mass causing the snake's size to shrink slightly. The mass that is lost from the boost appears in a line where the boost was used. This feature is useful outmanoeuvre over and defeat opponents.[6] The drawback is that the avatar will lose some length while being speed-boosted.

There is a border that confines avatars within the circular game board. If a snake hits the border, the player loses the game, but will not turn into the aforementioned pellets. A good strategy to defeat and consume enemies is by coiling and thereby trapping them within the player's snake, leading to the inevitable "death" of the opponents.[7] According to the app description in the Apple App Store, the player with the biggest snake at the end of the day gets to send a "victory message" to the world.[1]

There are several default skins, each one a different solid colour, randomly chosen when the player joins the server. Players can choose to customize their snake's appearances using custom skins with unique designs including the American flag and skins with motifs and colours representing famous Youtubers, such as Jacksepticeye and PewDiePie. In order to unlock custom skins, players must share the game on Twitter or Facebook using the external links found on the website.

The game uses WebSockets to communicate with the server, a low-latency protocol codified in the HTML5 standard and supported by all major browsers. In this regard, it is similar to other games including Agar.io.[8][9]

The game reached the top of the App Store sales charts in the free software category[10] in regions including the United States[11] and the United Kingdom.[12] Patricia Hernandez of Kotaku said that the game's low barriers to entry and similarity to Agar.io explained Slither.ioTemplate:'s popularity. She noted the game's fast pace.[3] Boing Boing compared the game's core mechanic to that of the 2009 game Osmos.[13] Brandt Ranj from Business Insider said that despite lagging heavily at times, Slither.io is very entertaining.[6]