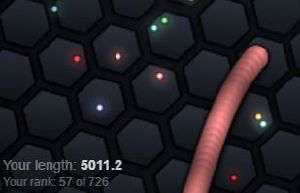 The length counter and standings section of the screen.

Length is one of the most important aspects of Slither.io. The length of your snake, which also determines its size, is displayed as a number in the lower left-hand corner of the screen. To increase your snake's length you must eat pellets, either those randomly generated by the game (which give a small amount of length), pellets left from speed boosting (small amount of pellets) or by eating the remains of other unlucky snakes who have died (typically giving much more length than individual pellets).

Snakes will lose length when they use their movement boost.

The length of a snake also determines its turning speed and radius. The bigger the snake, the slower the turning speed is and thus turning radius is larger. The snake continues to grow larger in length and thickness until it reaches the maximum length of about 40,000 mass. After this point the score will increase but the size of the snake will stay the same.

The player's vision is also affected by their snake's length, with the camera gradually zooming out the bigger they become up to a certain distance. Note that camera zooms out slowly so new players still have small vision for some time even after they've eaten a lot.

Currently there is a cap in place that limits the points a player can attain. As your points get higher there seems to be a countdown clock that gets shorter. every time you change direction or position in some major way it resets the countdown, as your score gets higher this becomes tougher to do, namely because of your size, restricted turn radius and worms following around you. Through limited testing at around 30-40K points you have maybe 30-45 minutes, after 40-50k you have maybe 15 minutes. As such this game seems to come with a hard limit which you cant surpass because you will eventually die from being unlucky if you stick to riskier movements. When this occurs you lose the ability to turn and as such you die either from other players or from hitting a wall. Its also possible that there is no cap since its not at a specific number, and that it is in fact a cheat some players are aware of that somehow takes away other players ability to turn. Its been mentioned a few times but there doesn't seem to be any recent info regarding it. For now its been confirmed to occur in the Chrome browser and while in incognito mode. it was suggested that a plugin may have affected the game but its strange that it only occurs north of 40K points so far.

Along with your current length, you are also shown where you rank among other players on the server. Typically this is shown as "X of Y Players" where X is your current rank and Y is the total number of players in your game.

The Leaderboard shows the current lengths and names of the top 10 longest snakes in the game. 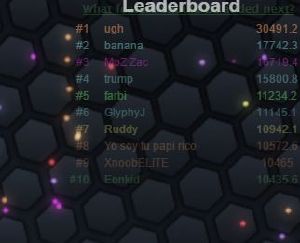